New Release: Women of the Cloth by April Bulmer 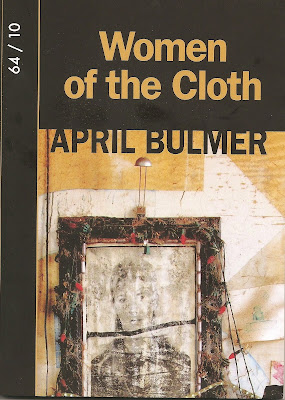 
As expressed in its enigmatic cover illustration, April Bulmer’s Women of the Cloth isn’t limited to a singular manifestation of spirituality – there is the Pagan, the Native, the Christian – all interchanging in these poems free of the entrenchment of dogma and a limited concept of Deity. This will not surprise Bulmer’s regular array of readers as the Divine Feminine has been front and centre in several of her earlier volumes of verse, most recently in The Goddess Psalms (Serengeti Press, 2008). Here though, our traditional visions of God and Christ are in abundance as well.

Bulmer makes generous use of her metaphors: especially those of moon, root, and blood. The Host of Holy Communion also appears in several places as do the New and Old Testament symbols of fish and milk. The poet’s narrative is concise and cutting, and the myriad of named characters, those spiritual “women of the cloth,” interweave between seekers such as Native medicine women and Catholic nuns. Indeed, all of these people seeking peace and healing in the Sacred find a unity within the symbols which manifest again and again through this book’s four sections. There are also passages and poems more personal that the author has strategically laid and the reader is left with a feeling of shifting through episodes of time, place, and perspective in this erudite effort to grasp meaning from difficult and tragic life events. Nature’s knell and vibrancy serve as canvas from start to finish.

Of all the varied women whose vignettes make up this collection, I was most struck by the pair of poems scribed on behalf of this one in particular, which perhaps breaks somewhat from the more abrupt tone which precedes and follows, mostly because of their more intimate voice and lines which are given greater room to breathe:


Avril: The Face of the Deep

My father’s land
was swamp and soft.
And the pond
home to muskrat and carp.

I could not care for it
nor him, as his mind dimmed,
a slow pool, thick and listless.

Locked in a little ward
he paced like a snail
remembering the smell of the land,
how it clung to his shoes and fingernails.

I lost my father
and the land.
The blue heron,
he left me too.
His wings like soft pleats.

Sometimes I sleep,
whisper with mice and water snakes.
There is a barge
and Dad and I set sail.
Balanced for a time
on the face of the deep.
God moving us
from place to place –
over reeds and their seeds
and through dead leaves,
their veins.

My father’s pigeons:
dead in the long grass.
He forgot to feed them
or hold them –
like gloves in his hands.
The cage. Faces
grey as fading moons.

I loved my father,
though he is guilty.
My own heart
in its barbed wire.

He came again
this morning.
His wings a shade of blue.
Feathers blood and damp:
I stroked
his wild and broken plumes.

The marriage of different spiritual traditions within a single volume is rather unique, and a fine example of Bulmer’s interest in Native ritual is evident in the following poem:

In the longhouse
I wear a mask carved like gull.
The braves bear my body in a canoe.
It is a dream-ritual.
But you are beyond
the banks of this sleep.

I want you:
my eyes are fish.
They desire the cave
that is your heart,
a stone temple.

Come, pad the soft plains
of the dream
in your suede shoes.
Wipe the perspiration
from my brow:
the beads embroidered
on the cloth
of my face.
Yes, in our vision quest,
a soft rag in your brown hand
you dab my forehead with grace.

Finally, Bulmer’s roots in Christian study shine through in so many of these verses and present a spiritual writing where didactic thought will gratefully not be found. Here’s another favourite below where the feminine mimics the sacrifice of the Son of God:

A canticle
in the Mary chapel.
Evensong:
the last rays of light.
My shadow.

You dream of the Virgin.
Lift her from the mule,
her perfect burden.

Perhaps I am as Magdalene:
disciple of the night.

Anoint my body
with milk.
Wash my feet.

I will spill my heart:
a cup of blood.
Offer my breast:
a loaf of wheat.


Women of the Cloth by April Bulmer is available directly from the author by emailing aprilb@golden.net and should be available soon for ordering through Black Moss Press: 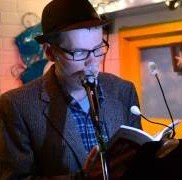